I went for a bike ride on Sunday. This route usually takes me about two hours, but thanks to my computer, this time it took less than ten minutes:

The video was taken with my ContourHD using the handlebar mount. It’s an interesting angle, but the mount doesn’t hold the camera as tightly as I would hope so there is quite a bit of vibration between the camera and the mount, even though the mount itself doesn’t move at all relative to the bike. On an earlier weekend I tried recording with the goggle mount connected to my helmet strap, but that was a bit of a hack and I look around a lot. I have ordered the vented helmet mount though to see if I want to utilize that while biking (for reduced noise) or skiing. Here’s a picture of the camera and mount: 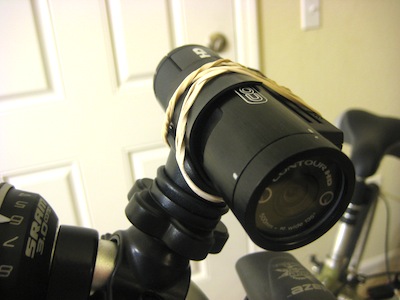 I didn’t use the rubber bands for this video, but I’ve found that they do help to reduce vibration a bit.

Here’s the route I recorded with My Tracks:

It would be really convenient if there was a standard way to record GPS data over time in a video, like how location data is stored in EXIF for photos. There’s at least one video camera coming out that records location data, so we’ll see how they implement things and what video software starts to support doing interesting things with video and location.

Now that I think about it, it’s also disappointing that location awareness isn’t built in to all still cameras yet. Here’s one way we could approach the problem:

Installing a GPS receiver in every camera may not be practical, especially since GPS doesn’t always work, such as indoors. There are other ways to get location data, but adding WiFi and cellular radios is just going to increase costs even more and may even require subscription fees. What you can do is assume that anyone who has a camera also has a phone, and that the phone has some sort of idea about where it is. You can then pair the camera with the phone (via Bluetooth or WiFi; whichever is easier/cheaper), and then with every picture the camera will ask the phone for its location and store it right within the EXIF data for the image. It may not always have a GPS fix, but location data of some accuracy would be recorded with each photo, which would save the photographer from manual location tagging later.